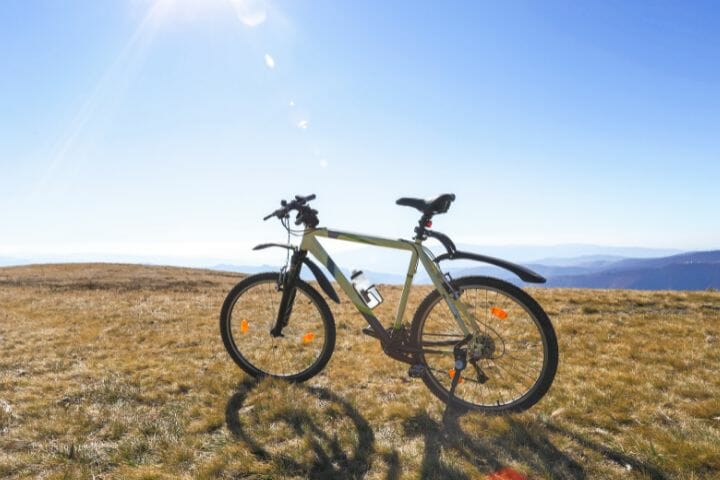 If you are planning to buy a bike, you might have done a bit of research on bike companies. One query that often comes up is: Are Giant bikes good? We decided to do a bit of digging to give you the real scoop.

With the plethora of options available at the market, choosing good bikes, especially when you have to choose between a Giant bike and a Trek bike, can create havoc in your mind.

At times like these, our mind gets confused with questions like, are Giant bikes good? Or what is the difference between GIant brand and Trek brand? And also, are giant bikes better than trek bikes? But, need not worry; we are here to answer all your questions.

First up, are Giant bikes good? Yes, they are reasonable, as they belong to the world’s largest manufacturers of bikes, but whether they are better than Trek depends upon your personal choice, the way you ride, and lastly, your budget.

As you know, Giant Bicycles is the biggest bicycle brand in the world, they are also known as the best budget bike brand as the bikes are comfortable, and their mountain and hybrid bikes always receive high ratings.

You might also like to read : How Do Canyon Bikes Fit? What Makes Their Fit So Perfect?

Why Are Giant Bicycles Good?

The location and heritage of Giant Bicycles as an original equipment manufacturer make them suitable, if not outstanding ( They used to make bikes for other bicycle manufacturers before they started creating their own, which helped them become industry leaders.

Let’s take a look at the history of Giant Bicycles?

Giant Bicycle Company, situated in Taiwan, was founded in 1972 and manufactured and supplies bicycle to Schwinn Bicycle Company in the United States. It immediately expanded to produce bikes for other brands, including Trek.

In 1987, when Schwinn split up to work with a cheaper manufacturer in China, Giant began developing its line of bicycles.

The location of the company benefits them in many ways.

Giant benefits from being located in Taiwan in a variety of ways. The island has a tight-knit supply chain with a wealth of precision-machinery development know-how and advanced manufacturing technologies.

Lead times in materials, design, and production may be lowered with a short distance between suppliers and OEM businesses. Giant distinguishes itself from its competitors by controlling the whole process in-house, from concept to raw materials to completed product.

Giant can produce bikes in half the time it would take in the United States and bring them to market with much lower costs. But lower costs don’t mean lower quality. Giant takes pride in its technological and quality roots, and they are more concerned with providing the most incredible goods at the lowest feasible price than with marketing.

The technology used in building Giant bikes is advanced.

Giant has always been on the cutting edge of significant technological advancements. As a result, they’ve helped popularise at least two innovations that are now industry standards.

Giant was the first major cycling brand to mass-produce a carbon road bike in 1987, with the high-volume production of their CADEX carbon-frame bike.

Giant released a road bike with “compact geometry” in 1997, which featured a slanted top tube and a smaller rear triangle. This style of frame is now trendy in the Bicycle industry.

Let’s compare both the companies.

Comparing both the companies will be a little tricky as both the companies have an excellent reputation and are respected worldwide. However, thousands of individuals will vote for one brand above the other and vice versa. A few minor distinctions between the bikes may help you determine whether a Giant bike or a Trek bike is better for you.

Bikes by Trek are more expensive than Giant bikes, and this is because of the place they are manufactured. The manufacturing process allows giants to keep the cost of the bikes lower. Though Trek has budget-friendly bikes overall, they are expensive.

Frames of the bikes

Giant’s frames are of the highest quality because they began as an OEM, and Trek’s bike frames are even sourced from Giant. Again, it has been said that Giant structures are not rigid enough; however, this is a matter of personal opinion. Trek has devised a method for increasing the strength and rigidity of its frames and optimizing the strength-to-weight ratio of its frames.

Performance of the bikes

Components of the bike.

When it comes to components, Hands down giant bikes are the best. Whenever you buy Giant bikes, stay assured that the components are better than any other available in the market. Moreover, the parts are super cheap, so it’s a win-win situation.

Design of the bikes

The design of the bikes honestly is a personal choice, and both brands are known for manufacturing unique designs. Giant bikes make sturdy and non-flashy bikes, and Trek is known for building flashy and shiny bikes. Giant is known for making quality bikes, whereas Trek is known for innovation, research, and development.

The reputation of the companies

Both businesses are well-known and have been producing bicycles since the 1970s. On the other hand, Trek may have a slight advantage over Giant because their bikes have won the Tour de France six times, and their firm is and has always been based in the United States (Waterloo, Wisconsin).

Some consumers prefer things created in the United States over those made in Taiwan. Nonetheless, if you are more into sturdiness, and simpler designs, then Giant is the one for you.

Warranty of the bikes.

Both brands’ warranties are restricted to material and workmanship problems. All Giant frames come with a lifetime warranty, except for their downhill bikes, which have a three-year warranty. A one-year guarantee also covers the paint finish and decals, and the original manufacturer covers any non-Giant branded parts.

The suspension technology used by both companies

Giant and Trek both have their unique suspension systems, yet none is superior to the other. With its proprietary ABP, Re: Aktiv, and Monolink systems, Giant employs the Maestro System. Their suspension technology separates the pedal and driving motion from the suspension, resulting in a more efficient ascent up a hill, for example.

Let us learn a little more about Giant Bicycles Bikes and the models that they offer.

Giant is the largest bike manufacturer; they have a massive selection of bikes, like hybrids, mountain bikes, cyclocross, and e-bikes. That’s not it, and they have a brand of bike known as Liv.

Many of their new top-tier bikes come with new standard features, such as Giant’s Giant Power Pro power meter. This crankset power meter has a magnetic USB charging method and claims to be accurate to within 2%. A list of Giant’s most popular bikes follows:

The Propel is equipped with flat-mount disc brakes. They claim that their disc-brake combination created less drag during aerodynamic tests than standard caliper brakes.

The basic Giant Propel comes with an Advanced-grade composite frame and an overDrive steerer. The Ultegra Di2 and the Giant SL1 aero wheelset come standard on the Propel Advanced 0. Deep-section wheels, more integrated cable routing, and the RideSense sensor are all included with the Advanced Pro. SL-grade carbon frames are used in the highest versions.

The Giant Liv Envie Liv is a women’s aero road bike with much of the same technology as the Propel.

Giant’s entry-level aluminum-framed road bike is the Contend. If you’re just getting started riding or need a solid commuting or winter bike, this is a terrific model to consider. It features a tall frame with a short reach and is meant to feel speedy and entertaining. For stability and comfort, the wheelbase is lengthy.

This bike has competed at the highest level, and Tom Dumoulin of the Netherlands rode it to win the UCI time trial world championship in 2017. The Trinity Advanced includes concealed brakes and tube shapes for resistance, and the Advanced Pro provides plenty of storage capacity for Ironman triathlons. Even, Avow, the Liv time trial bike, has the same storage and hydration options.

The AnyRoad provides a long endurance ride via a variety of terrain. The AnyRoad has an aluminum frame, but the AnyRoad CoMax has a carbon frame. It’s an adventure road bike with mechanical disc brakes and oversized tires that can handle most terrain. The top tube slopes steeply, allowing for a low stand-over height and improved maneuverability.

Giant’s solution to an endurance road bike is the Defy. They provide a relaxing ride that may be enjoyed throughout the day, and it also has excellent handling and acceleration.

The base model, dubbed Defy Advanced, is available in three distinct configurations. All three have an OverDrive steerer and an advanced-grade composite frame.

The OverDrive 2 and their RideSense monitor, a wireless sensor that can relay wheel speed and cadence information to a computer, are used in their Defy Advanced Pro.

The Liv Avail is a women’s Liv brand that comes in aluminum and carbon variants and mimics Defy’s features.

Escape is one of Giant’s hybrid bikes. It combines a racing bike’s fast and agile frame with a mountain bike’s rough and ready wide tires and flat handlebars. They work for both commuters and fitness riders. It has a road-style frame, triple cranksets, disc brakes, and many gears.

Liv Alight is a similar version of Herren Escape. The Giant offers many other types of bikes, including mountain bikes, cyclocross, leisure bikes, and even folding and electric bikes. They seem to have something for everyone.

Giants prefer traditional routes, so they sell their bikes at bike stores around the world. More than 12,000 dealers are selling giant bikes. This shows how popular they are

Let’s try to answer some questions that still might be bothering you.

Is Giant Better Than Trek?

The easiest way to determine whether you believe Giant is better than Trek is to see it yourself. Take a look at both, ride both, and experience both. Personal choice, riding style, and cost will all play a role.

They both have a wide selection of high-quality bikes, and Giant’s tagline is “Ride it. It’s a race. “Don’t be concerned,” as well as Trek’s tagline, “Ride bikes.” Have fun with it. You can’t go wrong with any brand if you want to “feel good.”

Why are giant bikes so expensive?

Giant bikes aren’t very expensive. Moreso, the cost of the bikes also depends upon the model that you are choosing.

Are Giant bikes better than GT?

The Giant bikes are better than GT bikes; although GT bikes have improved after being taken over by a company, they still fall short compared to Giant bikes.

Do Giant bikes hold their value?

Giant bikes hold their value! They have been in the market since eternity and have produced the finest of the bikes loved by everyone.

Giant bikes are great, and they are functional, easy on pockets, and the best option available in the market. So to answer your question, are giant bikes good? Yes, they are. So head onto the market and choose the best giant model available.